The World Through Disabled-Colored Glasses

Sadie and I recently found ourselves with a few hours to spare between doctor appointments. One great thing about the Children's Hospital's location in downtown Chicago is that any type of food you desire can be found within a 2-block radius. I had been craving Thai, so I was excited when my smart phone informed me of a Thai place just around the corner - yippee!

However, upon our arrival to the front of the restaurant, I realized that it was not going to work. Stairs. And lots of them - stairs up to the door, stairs up to the super cute patio that would have been a great place for us to sit outside on this lovely day. Bummer. No curry for me and no outdoor patio for Sadie.

Resigned that Thai would have to wait for another day, I rounded the corner pushing Sadie's chair. OK, I guess Chipotle will have to do. A little sloped ramp into the door, and what do we run into immediately once inside? STAIRS! Ugh...handicapped access to enter the restaurant isn't helpful if you have to navigate stairs once inside.

Fine. Let's do Potbelly next door. Two nice men open the door for Sadie and I. And, what do we get once inside? Yep. Stairs...again. I'm so frustrated by this point, I am on the verge of tears. The men who opened the door ask if I need help once they notice that I immediately turn to leave. I point out that there is no ramp for us to get to the counter and order food. They seem surprised (and annoyed) by the lack of accessibility as well - although I'm sure it wasn't apparent to them until I brought it to their attention. And, admittedly, these barriers were not at the forefront of my mind either in my pre-Sadie world. 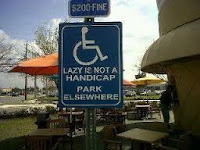 Once you have a child with a disability, you tend to view the world differently. Curbs, stairs, steps, uneven pavement - once easily navigable, become obstacles. You develop a new disdain for the non-disabled who use disabled parking spots for their convenience. Whose improper use seems to multiply exponentially on cold, rainy days.

I remember meeting a high school teacher in Charlotte who taught a class on diversity. As one of his assignments, he would require students to be in a wheelchair all weekend. I remember thinking what a valuable lesson this would be for everyone. And, got me thinking...maybe there could be some organization that could give a seal of approval to handicapped-friendly businesses? A sticker on the door perhaps alerting the wheelchair-bound person that they will not encounter stairs once entering said establishment? Something like this perhaps? http://www.jjslist.com/pages/seal_of_approval/158.php 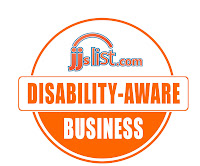 It's been 23 years since the Americans With Disabilities Act was passed, and there still exist businesses who - because the age of the structure in which their business resides - don't have to adhere to the tenets of ADA. (Perhaps they didn't see this - http://www.slchamber.com/page/sandbox/view/ubet )

Its just sad that some business owners continue to rest on the loopholes in ADA. It's also unfortunate, because I'm still craving my red curry.
Posted by Cathy McCann at 6:03 AM 4 comments:

What I Did This Summer

It's been a while since my last blog post - and a lot has happened in that short time. At the end of the last post, Sadie was being treated for pneumonia in the PICU at Lurie Children's Hospital. She was able to come home in mid-May after about a week in the hospital. She went back to school a few days later. Her regular school year ended in late May, and Sadie started her ESY program (or Extended School Year) in early June. ESY is essentially the same thing as school - same hours, days, etc., but it runs only through the end of June.


In early July, we took a short family vacation to a lovely beach house on the east side of Lake Michigan. The weather was great - "Sadie weather," as we call it - mid-70's with a nice breeze. Because Sadie has a hard time regulating her temperature, we try not to take her outside if it is too warm.  Sadie got to enjoy the beach for the first time and put her little toes in the sand. She also enjoyed laying on her towel in the shade - a regular bathing beauty!

The following week, we were preparing Sadie for surgery. For some time now, we had been speaking to her neurosurgeon and epilepsy doctor about placing a VNS (Vagus Nerve Stimulator). I mentioned the device and how it works in a previous blog post. Essentially, it helps to control erratic brain waves through a series of pulses to the vagus nerve. The device also comes with a magnet that can be "swiped" at the onset of a seizure - and has the potential to stop or decrease the severity of a seizure.

﻿
However, in typical Sadie fashion, a curveball was thrown at the last minute - and the VNS surgery was changed to a shunt revision procedure. You see, in addition to speaking to the doctors about the VNS, they had also been monitoring her shunt function. Despite multiple shunt taps and MRIs, Sadie's team of doctors wasn't convinced that her shunt was working properly. The MRI continued to show enlarged ventricles - which is an indication of excess fluid in the brain. So, two days prior to her scheduled VNS surgery, the procedure was changed and Sadie underwent a shunt revision.

During a shunt revision, the doctor checks all the components of the shunt - the catheters into the brain and down into the belly, as well as the valve function. The doctor explained that he knew there was an issue as soon as they opened up the incision, as fluid was pooling around the shunt. This is an indication that the valve was not working the way it should. The shunt valve - which was a fixed valve - was replaced with a programmable valve. With this new valve, the rate of flow can be adjusted if necessary.

The procedure itself took about 2 hours, and Sadie did great in recovery and was out of the hospital the next day. An MRI is scheduled for this week to see if this new valve is set to the correct setting. But, we are hopeful that this procedure corrected the issue with her shunt once and for all!

We are anxious to proceed with the VNS surgery. Sadie's seizures are still quite difficult to control. She has now tried 15 different treatments - a variety of medications, ketogenic diet, surgery - and she is still having seizures daily - sometimes more than 20 per day. We are hopeful that the VNS will help control at least some of these seizures. Another Aicardi mom conducted an informal poll of parents, and of the 20 parents who responded to her survey - 50% saw a reduction in seizures by half or greater. Pretty good odds, in my opinion.

While we wait to schedule her VNS surgery, Sadie will again be enrolled in RIC's (Rehabilitation Institute of Chicago) Day Rehab program where she will receive intensive therapy until school starts back up. Three days a week, two hours a day. I heard her give an exasperated sigh as the doctor and I discussed this therapy schedule. However, she progressed so well when she did this therapy post-brain surgery last Spring, I can only hope that it will help her just as much this time around.

Hope. It's something I've been thinking a lot about lately. As I mentioned, Sadie's seizures are still terrible. I'd be lying if I said there aren't many days when I feel hopeless - as if there is nothing else we can do for her. I do understand that there is the possibility that VNS therapy will not work for her. But, all we can do is HOPE.

It's this hope that keeps me from staring at the bottom of a bowl of brownie sundae daily. On the contrary, we've been doing our best to stay healthy - (trying to) eat right, getting to the gym, etc. - attempting to stay healthy for HER. But that's a topic for another blog post. For now, we are hanging by our fingernails to those strands of hope.