One Year Ago Today.

We walked in for our appointment with the neurologist to get the results of Sadie's MRI. That morning, I had a sinking feeling in the pit of my stomach...I just knew that it was not going to be good news.

The neurologist who diagnosed Sadie was an extremely kindhearted woman who began by having us explain to her what had been going on with Sadie. She then showed us photos of Sadie's MRI and pointed out the various cysts and abnormalities in her brain. It was during this appointment that she told us Sadie had Aicardi Syndrome. As Adin wrote notes in our notebook, he asked her how it was spelled.

She gave us literature about Aicardi Syndrome and began to explain what it would mean for Sadie. As Adin and I read the markers of the Syndrome: missing corpus callosum, seizures, infantile spasms, retinal scars and micropthalmia, we thought, "Yes, that's Sadie."

I remember the neurologist saying that Sadie would only develop mentally to 6 months to one year of age and would only have a 40% chance of making it into her early teens. I had to ask her to repeat herself...as my brain wasn't able to process this so quickly. She stepped out of the room to allow us time to digest this information. When she came back, we talked about seizure medications and follow up appointments with neurosurgeons and epileptologists.

Driving home was a blur. Adin and I didn't say one word to eachother. All that we had imagined for our daughter - playing softball, soccer, singing in the school choir, going to her first prom - had been taken from us in that short one-hour meeting.

Once arriving home, we began the hard task of making phone calls to our immediate family. How do you begin to deliver such bad news? I would always preface the conversation with "You're not going to know what to say when I tell you this....and that's OK."

The next few days were filled with profound sadness. I awoke the next morning hoping the day before had been a dream. Unfortunately it was not. Our families were (and continue to be) our saviors. It was comforting to be surrounded by people who shared in the sorrow.

Little did we know what the upcoming year would have in store for us - therapy sessions, numerous doctor's appointments, seizure medicines, hospital visits, oxygen tanks. But the past year has also given us a beautiful little girl who laughs when mommy coughs, smiles up at us from her crib, gets cranky when she's tired, puckers her lips when her Aunt goes in for a kiss, and looks with surprise when Baxter cries over a squirrel in the backyard.
Sadie has helped us become more tolerant, patient, kind and forgiving. The past twelve months have given us a broader perspective on life and reminded us to cherish every moment, because you never know when it could be taken away.
Posted by Cathy McCann at 8:14 AM 5 comments:

The only thing constant 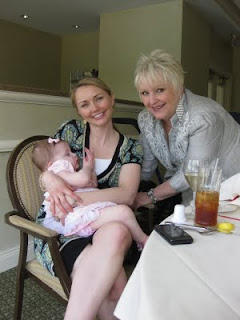 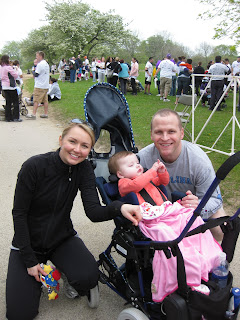 Recently, I've felt like the only thing constant is change. We're aching for some regularity in our lives. Seizures are changing, medications are changing, feeding is changing.

Some changes are for the better....

Like Sadie is now taking all her nutrition by mouth. NO MORE NG TUBE! She is excited about the bottle, excited about solid foods...NOT so excited by her medicine syringes. So we've been experimenting with different methods of getting the medicines in her belly. What complicates the issue is the thickening of the liquid. As mentioned in the previous blog post, Sadie's swallow study showed that she aspirates thin liquids and all of her medicines are thin liquids (compounded liquid or crushed tablets mixed with water.)

Another positive change is Sadie's EEG. She had another video EEG study done last week to look at her brain waves. Sadie's neurologist reported that her recent EEG showed "more organized brain activity."

We are also happy that Sadie is slowly shedding her cords. She has been doing great off oxygen during the day. She even gets through her daily naps off O2. She is, however, still needing a trickle of oxygen at night. But we hope to get rid of the nasal cannula soon! I can't say when we'll be comfortable taking her off the pulse oximeter. There is a certain level of comfort in knowing her heart rate and oxygen levels at all times...but I know that in order for us to live a more "normal" life, we'll have to get rid of it soon.

Some changes are for the worse...

Sadie's seizures are still a little out of control. We've had to use diastat five times in the past six weeks. The most recent episode happened while her aunt and I were out shopping. Sadie began to have a seizure that lasted upwards of 20 minutes. We quickly headed to the car and administered the Diastat in the back of the minivan. As we headed home, her O2 levels dropped quickly and she became unresponsive. We gave her some emergency oxygen, but the O2 levels only rose into the mid-90s. So, we again found ourselves in the ER at Lutheran General. By the time we arrived, Sadie's O2 levels were back up, but she was a little woozy from the Diastat.

Luckily, this time we were released within a few hours. The docs found that Sadie's Dilantin level was high (33.6). Therapeutic range is from 10-20. If the level gets too high, it can cause increased seizures. So, we're working with the doc to reduce her levels. We also started a new medicine this week, Ospolot. Ospolot is not yet FDA approved in the US, but is used to treat seizures in Europe. Clinical trials look promising for Sadie's seizure types. One of Sadie's Aicardi friends, Josie, has used the medicine for years and it has worked well. We are hopeful that this new medicine will also work for Sadie.

We had Sadie out and about in the past few weeks. The photo above shows us at the finish line of the Epilepsy 5K Walk. Sadie also enjoyed her very first tea party for her friend Carmen's fourth birthday! The photo above shows Sadie in her fancy party dress with her Mimi. (Can you tell she likes her hands?)

The changes remind us not to get too comfortable. So, Sadie's journey continues as we change course...and change course again.
Posted by Cathy McCann at 7:56 AM 2 comments: