The Things You Never Wanted To Know 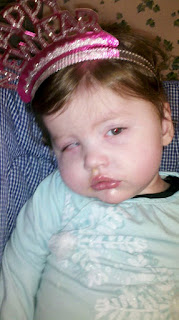 Parenting is a learning curve. All new parents understand the frustration of figuring out how to care for a new baby, whether it be the meaning of different-sounding cries, recognizing the "poopy-face," or how to assemble those darn Dr. Brown's bottles. However, parenting a child with special needs is a whole other ball of wax. There are quite a few things I've learned since becoming Sadie's mom that I never thought I'd need to know, nor ever wanted to know.

Here is a sampling:
- How to check for placement of an NG tube
- The names of the parking garage cashiers at Children's Memorial Hospital
- mg per kg calculations for Sadie's medicines
- How to put a regulator on an oxygen tank
- The definitions of fancy medical terms like hypsarrhythmia, hemispherectomy, and corpus callosum
- How to turn a hospital chair into a bed

Last week we were introduced to yet another thing that we never wanted to know. I've mentioned previously that a few of Sadie's doctors have questioned whether she has a metabolic or mitochondrial disease in addition to Aicardi Syndrome. Thus far, all the initial testing has come back negative. During our visit to Cleveland Clinic last week, we met with a doctor who specializes in this area. Despite the initial testing coming back negative, he explained that he strongly believes that an additional mitochondrial diagnosis does exist. He equated the initial blood and urine tests to fishing in a pond. Sometimes there are a bunch of fish there, but you don't catch any.

The problem with mitochondrial disease is there isn't a foolproof way to diagnose it, nor are there great treatment options. Diagnostic tests in order of least to most effective include: spinal tap, skin biopsy, and muscle biopsy (cutting a 2-3 inch incision in the thigh to extract about 1 cm of muscle). But even the muscle biopsy can miss a diagnosis 20% of the time. If they DO find that Sadie has a mitochondrial disease, treatment would include a vitamin regimen and some additional supplements to help the mitochondria function more effectively.

So...you're probably asking, what does this mean? Mitochondrial disease is scary stuff. Back to Biology 101, the mitochondria in the cell convert food into energy. When they don't work properly, kids get sicker faster, have a harder time recovering, eventually cells start dying, organs fail...you probably can fill in the rest.

So where does that leave Sadie? The doctor explained that some parents of medically-complex kids just decide to let it be an unanswered question. They just don't want to put their child through the diagnostic tests that may or may not yield results. Other parents do all the testing. Adin and I aren't yet sure what we'll do.

We went to Cleveland seeking some answers about pursuing brain surgery for Sadie, and left with a whole other set of questions. The initial feedback from the doctors is that a mitochondrial disease would not prevent them from doing surgery. There would be additional precautions the docs would take during surgery.

In deciding whether or not to do surgery, a few things the doctors said really hit home for us both. The neurosurgeon said that it is unlikely that the part of the brain they are proposing to remove (right frontal and parietal lobes) is doing anything besides causing seizures due to the extent of malformation. When discussing risks of the surgery, the the head epileptologist pointed out that yes, there are risks to the surgery, but there are also risks to having uncontrolled epilepsy for a lifetime.

So, we are going to pursue brain surgery for Sadie. It hasn't been an easy decision, but we feel like it is her best chance of gaining some seizure control. And, even if we see little or no improvement, at least we will know that we tried everything we could to give her a better quality of life.

In the meantime, we are letting the news about the additional mitochondrial disease settle in before we decide which diagnostic testing we'll pursue, if any. Yet another thing we never wanted to know...but we'll get through it. What would you do it if was your child?
Posted by Cathy McCann at 1:00 PM 3 comments: