How we found out 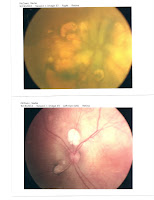 One of the most frequent questions we get asked, other than, what does it mean for Sadie, is "How did you find out?" Here's the story, in a nutshell...

It all started with Sadie's right eye. Shortly after Sadie was born, we noticed that her right eye was not opening as well as her left. We mentioned this to the pediatrician who attributed it to a clogged tear duct, which are common in newborns. A week later, when her eye still was not opening very well, we were referred to an opthomologist who diagnosed Sadie with micropthalmia and sent us to Children's Memorial Hospital for an eye exam under anesthesia. The journey began...

The photos above show what the eye exam revealed. The top photo is her right retina. The bottom is her left, which is more normal-looking. As you can see, Sadie has peculiar scars (lacunae) on her right retina. The opthalmolgist was not sure how the scars came to be, so we were referred to a retina specialist as well as a pediatric eye infectious disease specialist (yes, they exist). At the time, we were experiencing what we thought was our worst nightmare, that our daughter may not have vision in her eye and may need to wear a prosthetic.

It was around this same time that Sadie started tensing her body in a strange way. Her legs would come up and her arms would curve inwards. The pediatrician initially thought it was due to acid reflux. A few days later, she was still making these strange movements, and we started to notice that the movements came in clusters. After doing some research online, I found a link about a type of seizure called "infantile spasms." Anyone who deals with a sick child knows that the internet can be your worst enemy. After watching a few online videos, I knew that this was the same movement that Sadie was having. The online definition of infantile spasms is "catastrophic childhood epilepsy." My heart broke.

We were sent in for an EEG and then an MRI. The EEG showed abnormal brain activity. The MRI showed fluid-filled pockets in the brain as well as a missing corpus callosum. I remember getting ready the morning of our first neurologist appointment. I had a feeling that we wouldn't be getting good news. That was the morning of June 18th, the date Sadie was diagnosed with Aicardi Syndrome. The day our lives changed forever.

It all came together. Everything that Sadie had been experiencing - the retina scars, the spasms, cysts, missing corpus callosum - were symptoms of the syndrome. Looking back, how silly and vain I was to be so concerned about a lack of vision and a smaller eye. How I wish now that these were the only problems Sadie would have to deal with.