A Dose of Honesty 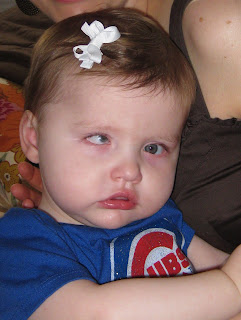 Recently, I received a Facebook message from a family who was considering adopting a newborn baby with Aicardi Syndrome. I don't know why the biological parents were giving up their daughter. Perhaps it was a decision they made before they realized this baby would have medical complications. Hopefully, it was not a decision made after the fact.

It struck me as amazing that there are people out there who would actually VOLUNTEER for this life. I came to the conclusion that this family must be truly special to accept a child with such severe special needs. As hard as it is to admit, if given the choice, I honestly can't say I would do the same.

It doesn't mean I don't love my precious Sadie for the special little baby she is. However, as she gets older and her disabilities are more visible, I struggle with how to respond to questions about her. After seeing Sadie in her baby wheelchair with an oxygen tank and pulse oximeter underneath, a man in the store asked "What's wrong with her?" I was taken aback. He likely was not aware of the insensitivity of his question. I stopped in mid-aisle and stood there for a few seconds, unsure of what to say. I finally uttered quietly, "Oh, she just needs a little oxygen," and scurried away before he could ask anything else. After thinking it through, a simple explanation "She has a rare neurological condition called Aicardi Syndrome," would have sufficed.

We did not ask for this life. Sometimes I feel like the deer-in-the-headlights cartoon character who is the only one in line who didn't take a step back. When people say "I don't know how you do it." I simply respond, "She is my daughter. You would do the same."

For the past few days, Sadie has been off the oxygen. She needed it, again, for a few weeks post-hospital. We have also seen some improvement with her seizure activity after a recent Dilantin increase. However, she is restless, not sleeping, and not eating very well. (Which means Mommy and Daddy are averaging about 4 hours of sleep a night.) If it's not one thing, it's another.

As for this special family and their unselfish desire to adopt this precious baby, the biological parents ultimately chose another adoptee family for the baby. I can only hope this special child went to a family who will cherish her for the beautiful angel she is.
Posted by Cathy McCann at 1:16 PM 3 comments: 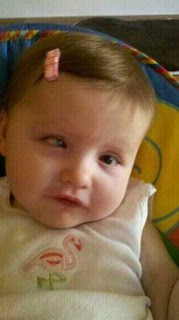 In Sadie's situation, we have epileptologists, pediatricians, dietitians - all helping to get Sadie out of "the weeds." But no matter how hard we tug, we just can't seem to get her to where she needs to be. We'll simply keep trying.
Posted by Cathy McCann at 11:49 AM 3 comments: