My Own Dose of Perspective 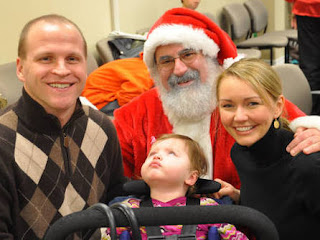 So, I was feeling a little guilty after my last blog post. You see, I didn't want anyone to think I was making reference to them when I was speaking about perspective. It was more of a general statement, not referencing any one person in particular. But that's the problem with generalities, folks tend to think you are talking about them. That was truly not my intention, so if I offended anyone, I apologize. Shortly after I posted that last blog entry, I was given my own dose of perspective.

We attended a holiday party put on by a great organization called Hope's Friends. (The photo above is from that party, with Sadie looking inquisitively at Santa.) The organization, under the Hospice umbrella, provides palliative care to children with life-limiting conditions. Attending the party were children with a variety of different diagnoses and conditions. It was a great reminder that even we need a little perspective from time to time.

Sadie has had a few busy weeks as we wrap up 2011. In addition to the holiday party mentioned above, we've spent time with our dear family and have gotten together with a few close friends for the holidays - all of whom showered Sadie with love and affection. She had her monthly visit to Lekotek (the special needs toy-lending program) where we picked out some great toys for her to play with over the holidays. We also heard back from our local park district, who agreed to install a special needs swing for Sadie at our neighborhood park. We're looking forward to warmer weather so she can enjoy her first time playing on a playground!

As we wrap up another year, I am reminded of all the wonderful people and organizations who have helped our family. From the friends and family who sat bedside with us during Sadie's five hospital stays this year to the volunteers who helped with caring for our lawn while Sadie was in the hospital. We are eternally grateful for everyone's support. 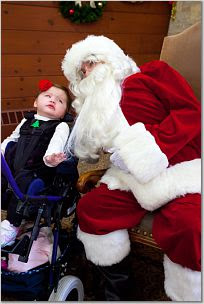 Recently, while speaking with a group of fellow special needs moms, the topic turned to our shared exasperation at some people's lack of perspective. These moms have kids with some of the most complex medical conditions - feeding tubes, daily seizures, non-verbal, non-mobile, oxygen requirements, etc.

One mom recanted a tale of a text message she received while she and her husband were writing up their daughter's DNR (Do Not Resuscitate) orders. The message of complaint from another mom detailed how her power had just gone out and she and the kids were forced out of the house to wait it out at the local Rainforest Cafe. My fellow special needs mommy wrote back, something to the effect of..."I'm sorry your day has been so hard. We're writing up our daughter's DNR Orders. Talk more later."

We all know these martyrs. The people who respond with a long sigh when you ask how their day is going. Always reminding you of their hardships, trials and tribulations. Even those who have legitimate things to complain about, they're just no fun to be around. I vowed never to be one of them.

Now, I realize that what may sound relatively trivial to me, is in fact, a big deal in these martyrs' lives. But, by about the sixth time I'm hearing about how they're just so worried that little Johnny is still using a pacifier, my head is about to explode. I want so badly to bring them back to reality and remind them that while they are googling the long-term dangers of pacifier reliance, we are debating whether or not we are going to have someone cut into our daughter's skull.

A good friend of mine suggested that this is exactly how I should respond. "Give them a little perspective," she said. No, instead I typically excuse myself from the conversation before I say something I'll regret.

Besides the lack of sleep, our little Sadie has been doing OK for the past few weeks. We are still dealing with seizures every day - but no diastat seizures for about 3 months now (quick prayer to seizure gods). She's still doing well OFF oxygen as well. Our recent challenge has been with feeding. As I mentioned in a previous blog post, we've been to see a second feeding therapist at Children's Memorial Hospital. She's provided us with a few additional tools to use with Sadie during her feeding times - such as a chewy tube (which promotes a natural chewing pattern), a maroon spoon, and a NUK brush.

These tools have provided for a bit more cooperation during feeding, but she'll still have quite a few mealtimes where she simply does not want to open her mouth and/or swallow her food. We've also been slowly introducing Sadie to a sippy cup during her feeding times, but some days she just has an aversion to any type of feeding. Luckily, we've still been able to keep her hydrated and get her daily calories in by using her bottle. We're just keeping at it.

In January, we will visit the docs at Cleveland Clinic again to talk about a possible surgery for Sadie. We were given the option to have surgery performed on this same trip, but decided that we'd need some time to process the conversations to make an informed decision. In the meantime, we're looking forward to spending a lovely Holiday Season with friends and family. And, when I encounter one of these martyrs, I'll just need to remind myself that it's not what happens to you, but how you react to it that matters.

P.S. The photo above is of Sadie meeting Santa for the first time - you can see she's overjoyed!
Posted by Cathy McCann at 11:31 AM 1 comment: