How Do You Measure a Year?


It's hard to believe that Sadie turns TWO this weekend. Although in some respects, it seems like she's been around longer than just two years. Heaven knows, the poor girl has endured so much in her short little life.

It has now been almost 9 weeks since Sadie's brain surgery. As the doctors predicted, Sadie is still having seizures. The seizures are milder and less frequent than before. Pre-surgery, Sadie was having 5-10 clusters/day lasting as long as 15 minutes. Post-surgery, she is at 4-6 clusters/day, with the most severe lasting 10 minutes. While this is a significant improvement, I can't help but be a bit disheartened that we didn't see a more drastic improvement. Although we went into the surgery with our expectations set, knowing that we could see NO improvement... as a parent, you can't help but HOPE for more.

Since my last blog post, sleep has improved slightly (quick prayer to sleep gods). At two years old, she still has trouble sleeping through the night, primarily due to the seizures that awaken her multiple times during the night. Mommy has now developed a habit of pulling her into bed with her if she awakens between 5-6 am. Mommy and Sadie snuggle, hold hands and dose for another hour or so. I have to admit, it's my favorite part of the day :)

Therapy is going well. Sadie's muscles are getting much stronger. Her head control and trunk control have improved immensely. We've also been working with a switch - basically a big button that teaches Sadie cause and effect. She currently uses a switch that says "eat" when we feed her. This picture shows her using a switch during a vision therapy session.

Unfortunately, until we receive that crystal ball from heaven, we'll have to continue making these difficult decisions on behalf of our daughter...not knowing the final outcome. Making each decision in the most thoughtful manner possible, all the while hoping...and hoping...that your decisions made will result in her having a better quality of life. And isn't that what EVERY parent wants for their child?

Last year's birthday blog post measured Sadie's doctor visits, therapy sessions, etc. This year, she has had the same busy schedule...but I feel like so much has changed. When we look at her, we don't see a child with disabilities. We see a child who knows her Mommy and Daddy - likes music, being outside, snuggling with her aunties...and a child who is HAPPY. And that is our biggest wish for her.
Posted by Cathy McCann at 5:50 AM 3 comments:

A Spring of New Beginnings (and Hats!) 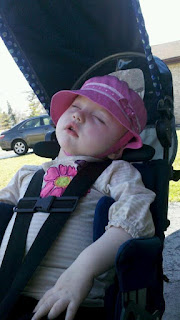 It has been three weeks since Sadie returned home from her stay at Cleveland Clinic. We have been enjoying getting back into our regular routine. Sadie's scar from surgery is healing up well and her hair is growing back slowly. She received an assortment of spring sun hats from her Grandma. We joke that it is the "Spring of Hats," for Sadie. Being the trendsetter that she is, I'm sure that soon everyone will be wearing them.

The seizures have been holding steady. They are still less intense and frequent than before surgery, but she still has multiple episodes per day. She continues to be quite vocal and active...even a bit hyperactive at times. She particularly likes to kick around and talk around 3:30 am. Once she awakens, it's fruitless to try to get her back to sleep, so we typically pull her into bed with us and just endure the yelling and swatting until one of us gives in and gets up for the day. It's really quite comical...and tortuous. I now understand how sleep deprivation is used as a method of torture. 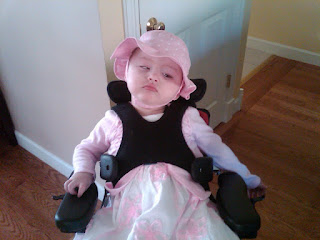 We have one more week until she is completely weaned off Phenobarbitol, so we are hopeful that the hyperactivity and sleep issues will settle out once her body has adjusted. Anecdotatally speaking, Phenobarbitol is notoriously difficult to wean and can cause all kinds of withdrawl symptoms in kids. We've spoken to many parents who have experienced similar difficulties during their child's wean.

Her doctor mentioned that we have the option of increasing her sleepy medicine (Neurontin) to try to get her to sleep a little longer. But, my mind was having a hard time making that leap...given that she just went through surgery in the hopes of weaning her OFF some of these meds. So, we decided to endure the sleep deprivation for a few more weeks until she is completely weaned off Phenobarbitol. Let's hope we can both keep our sanity until then...

Sadie's therapy schedule has been keeping us quite busy lately. Three days a week she is in the Day Rehab program at the Rehabilitation Institute of Chicago (RIC). She receives Physical Therapy, Occupational Therapy and Speech Therapy in Day Rehab. She also sees her regular therapists through Early Intervention (EI), but we have scaled back a bit with EI until she completes Day the program at RIC. Presently, we think she'll be in Day Rehab for at least two more months. The duration will be based on how well she is doing and how close she is to her pre-surgery baseline.

We've already seen HUGE improvements with her head and trunk control. When she left Cleveland Clinic, her muscles were quite floppy - a wet noodle. Now, she is managing her head quite well. She still needs to be supported while sitting, but that has also improved immensely. The therapists at RIC have ordered a Benik Vest for Sadie to help with her trunk control. Of course, Sadie's will be hot pink!

A bit of good news - we've heard back regarding Sadie's diagnostic testing for a mitochondrial disease, and so far, everything has come back negative. There are still a few tests outstanding, but this is great news.

In the meantime, we are beginning to plan for her two year birthday! It's hard to believe that Sadie will be turning two at the end of the month. Of course, we'll be on the hunt for the perfect hat for the occasion.
Posted by Cathy McCann at 1:18 PM 2 comments: