The Little Things. A Dash of Realism. 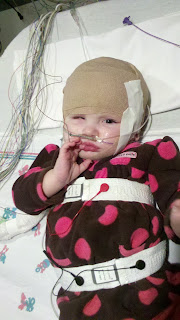 Much has happened in Sadie Land since our last blog post...swallow and sleep studies, a glorious period of seizure freedom, and a lot of new activity.

Sadie had her sleep study last week. The premise of a sleep study is to evaluate sleep patterns and determine if any sleep disorders (such as apnea) exist. As you can see by the photo above, multiple wires and sensors are placed on the body to evaluate breathing, leg movement, jaw movement, EEG patterns, etc. It's no wonder that Sadie slept horribly during this study. She was also recovering from a bad cold, so she was already a little congested. She slept about 4 hours that night.

When the nurse called to give the report, she informed me that no apnea was detected, but Sadie needed a little bit of oxygen (big surprise) and never got into REM sleep.

I asked, "Does apnea sometimes show up only in REM sleep?"
Nurse: Sometimes
Me: So do we have to repeat the sleep study once she's better and off oxygen?
Nurse: That probably isn't a bad idea.
Sigh...

I also asked for a copy of the report. It amazes me how much medical jargon is included in these reports. You'd think it was a contest between doctors. Example, the title of the sleep study report - "Nocturnal Polysomnograph Report." Interpreter, please.

Sadie's seizure activity has been all over the place in the past few weeks. She'll have a few good days, then a few really bad ones. Strangely enough, two weeks ago, the seizures stopped entirely. No medications were changed, nothing...we had 6 beautiful days of seizure freedom. Then the seizures came back 7 days later. We had to administer diastat (emergency med) after she had a long seizure that didn't go away after 40 minutes. It was a hugely disheartening.

Because the seizures now are looking a little different than even a few weeks ago, the doctor ordered another video EEG to determine if she is having different seizure types. This information helps the docs determine which medications will work best.

In positive news, Sadie is slowly coming off oxygen. She can go most days without. We do still have to put her nasal cannula in for naps and at night. Sadie has also delighted us the past few weeks by doing some pretty amazing things.

Reaching for and grabbing a toy - The past few weeks, Sadie has gotten pretty good at reaching and grabbing. I know she is interested in a toy when she lifts her right arm immediately when I bring the toy in front of her. She has started to grasp a few toys as well, even pinching some between her thumb and finger. This is a huge accomplishment. Previously, she wouldn't grasp at all and toys would simply fall out of her hand. She's still working on her grasp with the left hand, but I think she'll get there.

Because of this recent interest in toys, we've enrolled Sadie in Lekotek. Lekotek is an organization that helps families with special needs children learn how to play with toys. They have a variety of different toys that are more accessible to kids with special needs. Sadie has a hard time playing with toys due to her low muscle tone and lack of coordination. She can't press buttons on toys like most kids - many of the Lekotek toys are attached to switches which make them easier for Sadie to use.

Rolling over (almost) - Sadie can now get herself up on her left side. It's actually her preferred sleeping position. She'll wind up and flip her right arm and leg over her body - she has yet to fully roll onto her belly, but she has gotten her entire body over except for her head.

Eating - Sadie actually cooperated and we got through swallow study last week. The good news is, she was awake and swallowed her food. The bad news is she is aspirating some of it. The x-ray showed that some of her formula was getting into her lungs. The solution for the time being is to thicken her liquids. We are using a thickener called Simply Thick, which makes the formula the consistency of a thick nectar. The thicker liquid is more difficult to aspirate. We have an appointment to visit a feeding clinic at Easter Seals this week, and we'll work closely with her feeding therapist to tweak her feeds in the coming weeks.

We started to feed her orally the evening after the swallow study. She was a champ with the solid foods and took them great. Tears of joy filled my eyes as she began to suck on her bottle again. For parents of "normal" children, these proud tears are reserved for graduations, little league games, piano recitals, first proms. As parents of a special needs child, it's these small things that keep us going and give us hope.

There many people who say "you'll never know what she'll be able to do." And, while we appreciate the optimism, we have to temper it with a dash of realism, otherwise, we'd be constantly disappointed.

For Sadie, it's the little things that make us so happy - (almost) rolling over, giggling, sucking her bottle, reaching for a toy, grasping an object. We hope for more of these small achievements in the coming weeks.
Posted by Cathy McCann at 11:42 AM 2 comments: 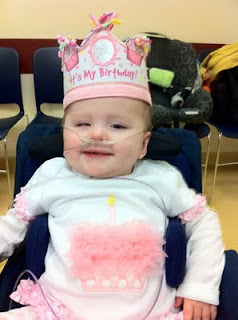 P.S. Sadie's Journey now has an option to "Follow by E-mail." To receive e-mail updates with new blog posts, enter your e-mail address in the field to the right.
Posted by Cathy McCann at 11:00 AM 2 comments: