I recently read this post by a fellow parent, and felt inclined to share during this season of Thanksgiving (complete with a little tongue-in-cheek humor).

As if you need a reason! Parents of children with special needs know more than most that every child is a gift worthy of thanks. EVERY ONE, the ones who thrive and the ones who strive, whether they become our legacy or we become theirs. But on those days when there doesn't seem much to be thankful for, or others are suggesting that your child must be just a burden, or well-meaning charities suggest giving thanks for healthy kids, check this list for a smile and a little inspiration.

1. You never have to worry about worrying over nothing.
Let other parents obsess over the frivolous and the shallow. Your child will make sure you always have something worthy to worry about.
2. Developmental delays = more years of hugs, kisses, and little-kid sweetness.
My 13-year-old still wants to sit in my lap, give me hugs, and tell me he loves me. What mom of a sullen teen doesn't secretly wish for the same?
3. Maybe someday, Ty Pennington will come build you a house.
Hey, Extreme Makeover: Home Edition loves families of children with special needs. Your little one may be your ticket to a lavish living space.
4. Any little milestone is a cause to throw a party.
Your child works hard for every step, sit-up and syllable, giving you lots to be excited about.
5. Every day is a learning experience.
Some days it's a pop quiz, some days it's a crash course, but life with your child is always an education, for sure.
6. You have the privilege of putting several doctors' children through college.
After paying for all those appointments, you may feel like a one-family scholarship foundation. Put your child's name on some letterhead and take pride.
7. You meet a better class of parent in waiting rooms and support groups.
Your child frees you from having to hang out with those snotty parents on the playground, and gives you entry into an exclusive club of people who are sensitive, sarcastic, and sure of their priorities.
8. You have an iron-clad escape excuse for any occasion.
You'd love to stay at that boring party, crowded event, endless church service, but, you know, your child just can't tolerate it. (And if sometimes it's you who can't tolerate it -- who's to know?)
9. Coming up with new strategies every day keeps your brain sharp.
They say doing crossword puzzles helps ward off Alzheimer's. Figuring out your child's schedules and treatments and lessons and rights and restrictions must easily provide twice the protection.
10. Your blessings will always be fully counted.
Other parents may take the gifts that their children bring for granted. Not you. Not ever.
Posted by Cathy McCann at 6:00 AM 1 comment:

The Beat Goes On 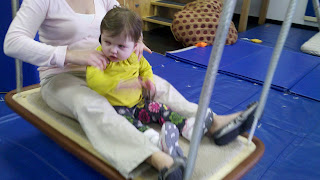 At this week's 18 month appointment with Sadie's pediatrician, I saw that her file had been upgraded. Most of the other kids' records are held in file folders. Sadie's records are now held in a large 5-inch three-ring binder. Luckily, we've made only a few additions to that binder recently, as the past few weeks have been relatively stable for Sadie. So we thought we'd take this opportunity to update you on what is going on with certain aspects of her life and general health.

Seizures - Seems like the logical place to start, since they (unfortunately) are such a big part of her life. Sadie is still having between 5-10 clusters of seizures a day. Mostly occurring when she is waking up. The clusters can last up to 10 minutes and vary in intensity. Relatively speaking, this is a better place than where she has been previously. We've now tried nine seizure meds (yes, nine), and have come to the conclusion that it is unlikely that we'll see significant improvement with medication changes alone. So we have been exploring surgical options. More on that to come.

Oxygen - Sadie has been off oxygen for about 2 months. (Yay!) She receives chest physical therapy (CPT) as well as an inhaled steroid (Flovent) twice a day. Chest PT is administered by tapping on her lungs with a little oxygen mask. It works to keep her lungs open and air moving freely. It's such a relief not to cart around oxygen tanks everywhere we go! We've even weaned ourselves off the pulse oximeter monitor (during the day, at least, she's still on it at night).

Eyes - Sadie's last MRI showed a growing cyst behind her right eye (the smaller eye). Her opthomologist will monitor the cyst by viewing her MRIs every 6 months. He is not terribly concerned and advised us that if it does create a problem, he can easily drain it. We did discover some good news recently with the help of Sadie's vision therapist. We now suspect that she does have some light perception in her right eye. Her therapist patched the eye with good vision and waved a light stick in front of Sadie. She promptly reached out and grabbed at it - much to our astonishment. Go Sadie!

Therapy - Sadie's therapy schedule is still going well. She is making strides with her therapies, and we've continued music therapy, and even added a massage therapist once a month! (Too bad massage therapy isn't also for mommy!) Sadie has also been using her stander during physical therapy. The stander is equipment that keeps her upright in a standing position. She stands for about two hours total every day. Because she isn't bearing weight on her own, the weight-bearing position helps for better development of her bones and joints. (The photos above show some of Sadie's activities during physical therapy (standing, sans stander) and swinging in the gym at the therapy center.)

Ketogenic Diet- Sadie has now been on the Ketogenic Diet for the past 15 months. We continue to measure out her food to the precise gram. She is taking her bottle pretty well, and we'll start to transition her onto a sippy cup soon. We've hit a stumbling block trying to get her from pureed foods to foods with a bit more texture. The high fat ratio of the Ketogenic diet has provided some challenges with transitioning to foods with more texture - there are only a few things that have such a high fat content. We're using a few recipes (such as a pancake made with her KetoCal powder, or a little bit of chicken mixed with mayo and avocado). She'll hold the chicken or pancake in her mouth, but won't chew or swallow. We're seeking out some supplemental feeding therapy from Children's Memorial to see if we can overcome this hurdle.

Sleep - Sleep is still a major challenge with Sadie. Her naps during the day rarely last longer than 20 minutes, then she is awakened with a seizure. After 18 months of not sleeping through the night, we put her on a medicine called Neurontin, which has helped slightly. She is still awakening at night with seizures, but will typically go back to sleep. Unfortunately, she rarely sleeps past 6 am. The past few nights, she's been up for the day at 4:45 am and 5:30 am respectively. We are considering hiring a night nurse to monitor her seizures at night so we can get some rest.

Surgery Update - We're still waiting on some test results requested by the doctors at Cleveland Clinic. We're planning another visit to Cleveland in the next month for a consultation with the doctors. If everything goes well, we'll likely schedule Sadie's brain surgery for the beginning of next year.

We're hoping that the upcoming Holiday season continues to proceed smoothly for Sadie. Please pray for no hospital visits or unexpected illnesses. We want to keep that medical record binder as thin as possible!
Posted by Cathy McCann at 7:12 AM 1 comment: