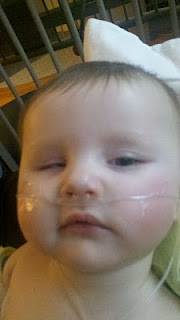 We again found ourselves in the ER at Children's Memorial after Sadie was coughing and struggling to breathe. Our ER visit began the same way as our visit last month. She was assessed by a triage nurse who raced her back to the trauma room when she saw her O2 levels at 80%. It was as if we had roles in a poorly-scriped sequel where the plot line is the same, but all the characters are different.
The doctors tried their hardest not to intubate her, but just couldn't get her blood pressure or oxygen levels high enough. So, again she was intubated and put on a ventilator. A scary procedure for us to witness, as they had trouble getting the tube in her throat through a swollen airway. We saw her oxygen levels dip into the 10s, twice.
We are now at day 6 of her hospital stay in the ICU. Sadie seemed to be recovering and in good spirits until yesterday when out of nowhere her seizure activity spiked. She was given three sedatives to get the seizure to stop...then another dose after another cluster started an hour later. One step forward, two steps back.
Our strong little girl continues her feisty behavior - pulling out her nasal oxygen tube, squirming out of her arm immobilizer. She also decided that the x-ray table was the perfect place for a poonami. We hope this bodes well for her release soon.
Posted by Cathy McCann at 8:24 AM 3 comments:

It's been a while since Adin and I attended the Aicardi Family Conference last July. I think we needed some reflection time before being able to properly communicate our experience. The Aicardi Syndrome Foundation hosts this bi-annual conference for families affected by Aicardi Syndrome. As fate would have it, it just so happened to be three weeks after Sadie was diagnosed, and in the western Chicago suburbs.

We received a call from another mother encouraging us to go. We weren't sure if we were ready to face this reality, but decided that it would definitely be helpful for us to learn more about this new world we were about to enter.

I still remember our first day at the conference. Pulling into the hotel parking lot, I had ideas of what I might see - lots of handicapped vehicles, girls in wheelchairs - my heart was beating out of my chest as we entered the registration room. Everywhere we looked, there were girls affected by the Syndrome who seemed very limited in their abilities. Many were unable to walk, speak, hold their heads up independently...it was very emotional for both of us. As another new parent so appropriately put it,"It's like looking into a crystal ball...but you don't like what you're seeing."

We were greeted with open arms by the families. We were so grateful to attend this conference and learn more about Aicardi Syndrome, as well as the many issues that we will be dealing with as Sadie gets older - advocacy, special needs trusts, therapies, specialized equipment, etc. But most of all, it gave us a support group of familes going through the same thing. We met some great people who we will keep in touch with for many years.

When you're raising a disabled child, your perspective of others with disabilites is quickly adjusted. By the end of the three-day conference, I realized that I was no longer seeing these children in terms of what they could NOT do, and instead was seeing what they COULD do.
Posted by Cathy McCann at 7:25 PM 2 comments:

A New Set of Problems. 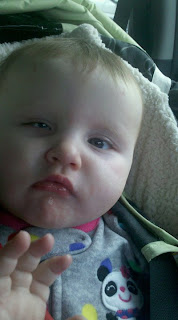 Sadie was finally released from the hospital on Saturday, eight days after first arriving - well, nine if you count the day she was there for her MRI.

I'll start where I left off. On Day 5, we were moved from the PICU to the 9th floor. I have to say, while we have always been impressed with the personnel at Children's Memorial Hospital, there is a level of care and attentiveness that Sadie received in the ER and PICU that we didn't see once we were moved to a floor. Our stress level rose knowing that there was no longer a nurse right outside her door all night. I understand that this is to be expected as your child's health improves, but there is something comforting knowing that a trained medical professional is keeping an eye on your child while she sleeps.

It also didn't help that our trip to nine started with Sadie crying out in pain, then the seizure cycle started up again - and for the second time during our hospital stay, she was given Ativan (a seizure suppressant/sedative) to calm her down. The exploration for the acute pain began. The doctors x-rayed her belly, which was puffy with air from being on the ventilator and high-flow oxygen. Sadie also received an ultrasound to check for kidney stones. She again began her pain cry/seizure cycle the next day, and again Ativan was administered.

We wracked our brains looking for an answer. One of the nurses suggested that perhaps her tummy was upset from not having food for so long, so we started her on Zantac for acid reflux. She seemed a bit better and the pain cries went away. Mystery solved, or so we thought...

So, we've been back at home for a few days now. Sadie seems to have kicked RSV, but with one resolution comes a new set of problems. Her seizures are again on the rise - occurring every 30 minutes or so. She's also been quite irritable lately and has been crying out for no reason. We suspect it's her new medicine, which can cause irritability. We see her neurologist this week and hope to have some resolutions.

P.S. Last week, another Aicardi Family, the Verdecchia's, were profiled on The Today Show about their daughter's brain surgery. Here is the link to the story. We were planning to write a post about this, but our friend Neil Pasher beat us to it. His question is one that resonates with us as we make difficult decisions about Sadie's care. Read his eloquent blog post.
Posted by Cathy McCann at 6:21 PM 1 comment: