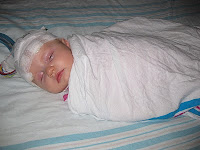 We are cautiously optimistic.
Posted by Cathy McCann at 9:45 AM