Another year, another hospital visit 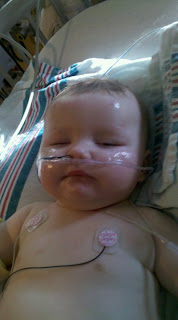 Just as soon as things got better, they got worse. Sadie was at Children's Memorial Hospital for an MRI last Thursday. Despite receiving a bit of oxygen following the procedure, she was fine. We were home on Thursday night and she went right to sleep.

Friday morning, Sadie arose with horrible breathing, coughing, and irritation in her throat. She had received a tube in her throat during the procedure, so we thought it was irritation from the tube. As her breathing progressively worsened, we decide to take her into the ER.

We again found ourselves at CMH. After a quick assessment by the triage nurse, they rushed her into one of the larger operating rooms. Doctors and nurses quickly started working on Sadie. In the time it took for Adin to park the car, about 20 medical professionals had filed into the room. It was quite scary. They first put her on a mask with a breathing treatment, which seemed to clear her airway. They also gave her a steroid to stop the swelling in her throat.

She seemed fine for a few hours, then the seizures started. One cluster, the two, then three...they progressively got worse until she was almost status epilepticus (a state of nonstop seizure). She was given a sedative to stop the seizure, but it was not terribly effective. The doctor decided to give her a dose of fosphenytoin, a paralytic, to stop the seizing. In order to administer the med, the had to intubate to protect her airway. That procedure was even scarier, at least 5 doctors and 20 other medical professionals raced into the room for the intubation.

So began our hospital stay. They determined that Sadie had a virus called RSV, which most likely was the cause of the raspy breathing. RSV is a cold-like virus that can be very serious in infants. The breathing tube stayed in for a few days, we were very relieved when it was removed without incident a few days later.

We write this from the bedside at Children's Memorial and hope to have Sadie back at home very soon.
Posted by Cathy McCann at 5:53 AM