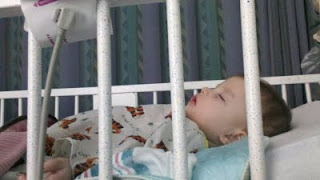 Since my last blog post, Sadie's seizures have gotten significantly worse - the twitching episodes are now happening every 2-5 minutes. After giving Diastat 3 times in 48 hours, we felt uncomfortable managing the seizures at home, and decided that she needed to be in the hospital. Upon our arrival to the ER, Sadie was given a dose of phenobarbitol to calm her brain activity. The medicine completely knocked her out. We were hopeful that it would give her some much-needed rest and seizure relief while allowing for the prednisolone to take effect.

Let me backtrack...after 10 days of crazy seizure activity (every 5 minutes,) we decided to start a steroid treatment, prednisolone. We had previously rejected the steroid route due to their intense side effects - suppressed immune system, irritability, increased blood pressure, weight gain, etc. Also, steroids are typically a short term treatment and sometimes the seizures come right back once treatment ends. Well, after dealing with seizures all day long, we were desperate for anything that might help.

So...back at the hospital...once the phenobarb wore off, Sadie's seizures returned. It seemed that the more mild steroid treatment (prednisolone) was not working. Time to call in the big guns. Desperate times call for desperate measures. Sadie starts her ACTH treatment tomorrow. ACTH is another steroid treatment that we had previously dismissed due to all the scary side effects listed above as well as a high mortality rate due to illnesses contracted because of a suppressed imune system. It was a difficult decision, but we feel like we need to give this a try for Sadie's sake. Our list of options narrow and the choices after ACTH are pretty shitty (excuse my french)...and would include possible hemispherectomy (removing part of Sadie's brain.)

I hope the day is close in the future when I will be able to share some positive news. Thanks to everyone for your contiued support.

P.S. The photo above is my view from my hospital chair...where I get very little sleep.
Posted by Cathy McCann at 7:03 AM