Life with Sadie is a series of putting out fires. We're always waiting for the next one to pop up.
Luckily, the biggest fire of this Fall was extinguished. We heard back from the docs that the CT scan showed her brain looked stable. No fluid was building up, and the cyst fenestration surgery appeared to be doing it's job - allowing the fluid to naturally circulate again. We all exhaled.

However, soon after hearing this good news, another set of fires popped up. This Fall began with the first "fire," Sadie's mild pneumonia. She spent a few days on oxygen and recovered quickly. Shortly after finishing her antibiotics for pneumonia, she was diagnosed with a Urinary Tract Infection (UTI). Sadie used to get UTIs frequently when she was younger, but since starting a maintenance course of Bactrim, she has been UTI-free. Well, this one must have been a bit too much for the antibiotic to handle. So...she started another 10-day course.

In the middle of treatment for her UTI, the third "fire" erupted. Sadie awoke last Saturday morning very lethargic and with a "barky" cough. The pediatrician diagnosed croup. Her oxygen continued to drop throughout the day, until our home oxygen tanks just couldn't keep up anymore. Down to Lurie Children's Hospital we went...

She was diagnosed with a respiratory virus (rhinovirus) which led to the croup. When adults develop rhinovirus, it manifests itself as the common cold. When Sadie develops rhinovirus, it turns into an ER visit and a two-day hospital stay. By Monday morning she was completely off oxygen and back to herself.

You see, the problem with these fires is that the embers from one fire can ignite another. Along with an xray of her lungs, the docs xrayed Sadie's belly to get a better look at the GI issues she's been experiencing (as mentioned in the last blog). While the lung xray looked fine, the docs were concerned enough about her belly scan that they called in the surgery team to look for an obstruction.

Luckily, no obstruction was found, but the belly was full of poo and gas - even though she had a series of bowel movements in previous days. She is scheduled to see a motility specialist to see why her bowels aren't moving like they should be. The docs mentioned that the full belly could have contributed to the breathing troubles as well.

And there are some fires just refuse to go out no matter how much water you throw at them (case in point, the seizures). Sadie's seizures have been pretty awful lately. She's still having her typical infantile spasm clusters a few times daily, but has also started to have lip-smacking seizures. Her face gets red and she'll smack her lips and move her mouth around strangely. These seizures have been occurring about 20 times a day. On Thursday, she was back at Lurie for an overnight EEG. In the short time she was hooked up, I pressed the seizure button twenty-two times. Yes, twenty-two times.

We had been trying to wean her off her heavy medicine load for some time, but it looks like the medicine we were trying to wean (Vigabatrin), may have been doing some good.  So, now we are titrating the dose back up. Ugh...it's a horrible game of trial and error. 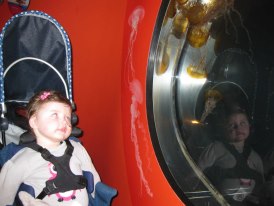 On a lighter note, in between these illnesses, we were able to get Sadie out to the Shedd Aquarium to look at the fishies! She just loved the jellyfish! I think it was a combination of the dark room and the lit-up aquarium. You can tell just by looking at her face how much she enjoys it. (And, no...sorry folks...we will not be getting jellyfish at home.)

So...in the meantime, we'll keep working on these fires until we find a way to extinguish them once and for all.
Posted by Cathy McCann at 3:35 PM