Milestones, Shmilestones. Her own yardstick. 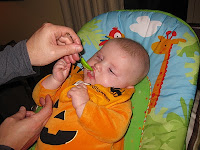 Comparisons are inevititable. I think mothers are particularly guilty of comparing their child to others. I remember walking into my first session of a new moms group and being envious of the mother whose 11-week-old could already hold his head up.

Comparisons are everywhere. I get increasingly frustrated with the amount of literature devoted to "milestones." Every time I pick up a piece of paper that talks about which milestones your child should have mastered by a particular age, I throw it in the trash. I've shelved "What to Expect the First Year" and unsubscribed from BabyCenter e-mails that tell me what my child should be doing.

Am I ignoring the milestones? No, they are everywhere I look - the baby in the mall playing with a toy, the friend's child who holds a gaze longer than Sadie, the child in the grocery cart who can sit in the front and not have to be toted in a car seat. Do we want her to reach these milestones? More than anything. But we're not willing to obsess about it so much that we forget to enjoy our precious 6 month old baby.

Yes, Sadie turned 6 months old this week. Her getting older is not without challenges. She still struggles with many of the gross motor skills that most children have mastered by this age. I recently asked one of Sadie's therapists how she compares developmentally to other babies her age. She wisely responded that we use "a different yardstick" for Sadie.

This six-month old has recently sprouted her two bottom teeth! She has also found her thumb and has taken to sucking on it. Sadie started solid foods on Halloween night. For the ketogenic diet, this means rice cereal and baby food mixed with butter, all measured out the the precise gram. It took her a few spoonfuls to understand what was going on, but after she realized it was food, she quickly got the hang of it. Leave it to our little girl to take to solid foods like a champ! When I fed her the next day I swear she got excited when she saw the spoon.

We received the results from her most recent EEG. While the neurologist was happy that the brain activity seemed more organized than her last EEG, she was unsure if Sadie would ever have a "normal" EEG given the damage in her brain. The good news is, the only seizures that are showing up on the EEG are those that we can see. The bad news is, she is still having quite a few seizures a day. She is hovering between 7-10 clusters of spasms a day. We're still increasing medications (topomax and vigabatrin) and tweaking the diet to see if we can gain more seizure control.

While Sadie may not yet be able to hold her head up or sit without support, she is a delightful little girl who loves social interaction, smiles at everyone, and will do her best to join in the conversation - and for now, that's good enough for us.
Posted by Cathy McCann at 2:46 PM