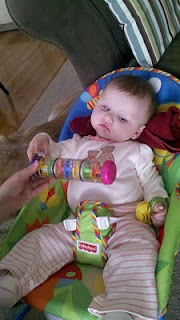 Sadie has been home from the hospital for about a week. She is still struggling with kicking this recent respiratory virus. At her pediatrician's request, she is now the proud owner of a pulse oximeter and a nebulizer machine. We will use the pulse-ox at home to monitor her O2 levels should she get sick again. We've been using the nebulizer machine to give her albuterol breathing treatments three times a day. We'll continue with the treatments until the virus works its way out and her breathing returns to normal.

While in the hospital, we finally weaned Sadie off of one seizure medicine. While Clobazam looked promising at first, it seemed to be having an adverse affect, as Sadie's seizures went up with each increase in dosage. Once we backed off the dosage, her seizure activity went down. We also started Sadie on Dilantin when she was having a rough time with seizures at the hospital. I hesitate to say that her current seizure medication cocktail (dilantin, vigabatrin, topomax and clonazapam) seems to be showing some improvement. The seizures are at their lowest level. She still has episodes daily, but we've gone from 20+ seizures a day down to 3-5. Our next step is to slowly wean a few of these meds that we're not entirely sure are working, something we've been wanting to do for quite some time.

We also received some troubling news a few months ago that I didn't feel comfortable blogging about at the time. The doctor noticed some new brain abnormalities in Sadie's recent MRI. According to the doctor, there were a few areas that showed some "disbursed white matter." She said the changes looked consistent with a mitochondrial or metabolic disorder. "Instead of her Aicardi diagnosis?" I asked. "In addition to her Aicardi diagnosis," she responded. Wonderful.

This time around, I did no googling, no researching...I simply just ignored the fact that our daughter was being tested for an additional disease and kept on living. As a friend so wisely stated, "no point in going down paths that aren't yours."

I've come to the conclusion that we are the big losers when it comes to the battle of the odds. If a medication has a extremely rare side effect, Sadie is bound to get it. As it turns out, that's what the doctors think is happening with these MRI abnormalities. So far, all the mitochondrial and metabolic tests have come back within normal ranges. So that leaves the medicine. Apparently, one of Sadie's seizure medications, Vigabatrin, can cause MRI abnormalities that are similar to those shown in Sadie's MRI. The problem occurs with high doses and when children are very young (check, check). The good news is these abnormalities often revert back to normal once the medication is weaned. So, the plan is to slowly get her off vigabatrin and hope it is a transient finding and the MRI goes back to its original state.

We are overjoyed to be home after our 7-day stay at Children's Memorial. Sadie has been delightful this week. Smiling, chatting, happier than we've ever seen her. She dove headfirst into her therapies this week and did a great job. The picture above was taken during one of her monthly music therapy sessions. She liked the rain stick toy, but she liked her therapist's diamond ring even more. Smart girl.

The only trouble we've had with her is sleep. The girl simply doesn't sleep. And when I say that, I mean she is up about every hour at night. I found that one side effect of dilantin is insomnia. However, I'm not willing to give up seizure control for sleep. Insomnia combined with the coughing make for long nights for the McCann clan. We've been encouraged by her doctors to explore melatonin, which is a mild, naturally-occurring sleep aid for children. With all the medicine that she's on, we've been hesitant to add one more thing...but give us a few more nights and we may be there. For now, we thank God for espresso.
Posted by Cathy McCann at 10:52 AM