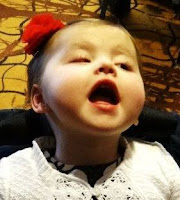 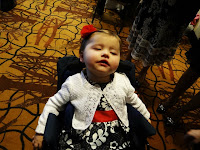 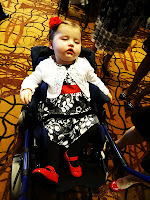 We recently returned from a visit to Cleveland Clinic. On our way to Cleveland, we stopped in South Bend for a family wedding. Sadie loved interacting with everyone at the wedding - the photos above are from the cocktail hour.

The purpose of our Cleveland visit was to get a second opinion on Sadie's treatment and to see if the docs there would recommend her for surgery. The facility at Cleveland Clinic was breathtaking...a lobby filled with beautiful artwork - even a few Plensas, and a lovely rooftop terrace with views of the Cleveland skyline.

On Day One, we met with Dr. Elaine Wyllie who heads up the Epilepsy Center at Cleveland Clinic. Dr. Wyllie said that their team will only recommend surgery if they truly believe it will be helpful to Sadie. If surgery is not offered, they will provide their input on her treatment and other options to consider. Our goal all along has been to allow Sadie to have the best developmental outcome possible, so that worked for us. After our meeting with the doctor, Sadie checked in to the Epilepsy Monitoring Unit to be hooked up to the Video EEG for the next four days.

The Video EEG process at Cleveland Clinic is quite thorough. From the placement of the sensors on her head, which was precisely mapped out with a measuring tape, to the re-application of sensor conducting gel...the process is quite intensive. As with Sadie's previous video EEGs, we press a button each time we see a seizure. Each time the button is pressed, at least 4 people rush into the room to note the seizure presentation, as well as to ensure the video is capturing the movement accurately. The techs review the entire EEG, both push-button and non-push-button events and note any abnormal activity for the doctors.

We had been informed by our docs at Childrens that Sadie has no sub-clinical seizures (i.e. seizures that we do not see...with no physical presentation.) While her brain waves are a little messy on her EEG, the lack of subclinical seizures was re-confirmed at Cleveland Clinic, which is comforting to know. They did mention that her brain waves during sleep are pretty active, which could explain her horrible sleep patterns.

For at least two hours after Sadie was admitted, a steady stream of hospital staff was in and out of the room - doctors, nurse practitioners, dietitians, technicians. The anesthesiologist reviewed instructions for Sadie's PET scan the following day - no food after 4 am. This presents a challenge as all her meds are given in a bottle of formula at 6:30...so for each day we were there, we were waking up at an ungodly hour to feed her and give meds. We had to laugh when the nurse, seeing Sadie asleep at 8 pm on the first day, asked "So, is she out for the night?" Don't we wish!

Sadie's first test was a PET Scan. A solution was injected through her IV. The tech mentioned that they would monitor her awake brain waves for 30 minutes prior to going under anesthesia. I swear, as soon as she heard that she needed to stay awake, her eyes promptly shut. That's our Sadie for you...always battling authority. This started a 30 minute circus act of mommy loudly singing songs, playing with toys, wet washcloths, tummy time...whatever I could do to keep her awake. Unfortunately, I was only moderately successful.

Sadie was put under anesthesia for all three of her tests. On Wednesday, Sadie had her first ICTAL SPECT test. For this test, a radioisotope was injected via IV at the onset of a seizure, and her brain was scanned to determine where the seizure originated. On Thursday, the same test and scan was conducted during non-seizure brain activity to get a baseline. We were informed that the radioactive isotope would leave Sadie's body through her urine, so she had blue radioactive diapers for 48 hours.

This morning of Sadie's first Ictal SPECT test, the nurse sat by Sadie's bedside and waited for seizure activity. Luckily for her, Sadie cooperated and had a seizure in the first 30 minutes. Unfortunately, when the nurse injected the radioactive isotope, a little of it spilled out of Sadie's IV...so the docs needed to calculate how much got into her system. So, this took a little more time, but it also got Sadie into anesthesia for the scan a little quicker.

Before we left Cleveland, the doctor revealed that she thinks surgery might be an option for Sadie. She was initially cautious about surgery because her brain abnormalities are in both hemispheres, and she shows abnormal EEG activity from both sides. But she mentioned that based on the test results she's seen thus far, she thinks she can identify an area of the brain that could be removed to improve her seizures and developmental outcome, while preserving most of the vision in her left eye.

Vision has always been one of our major concerns with surgery. Removing the right hemisphere of her brain would also impair the vision in her left eye - the eye that has good vision. Sadie gets such pleasure from visual interaction, we are hesitant to take this away...even partially. Of course this is a preliminary assessment, and we will hear their final recommendation after the entire team has had a chance to review her info during their Patient Management Conference.

Overall, we were very pleased with the staff, nurses, and doctors at Cleveland Clinic. We are anxious to hear the final set of recommendations this week after the doctors' conference on Tuesday. Sadie definitely earned an "S" on her chest - which will make her Supergirl Halloween costume even more appropriate this year.
Posted by Cathy McCann at 6:36 AM