And the Verdict Is... 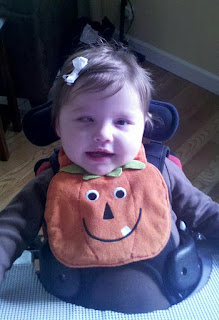 Rather anticlimactic. We heard back from Cleveland Clinic a few weeks ago. The docs want to conduct more testing on Sadie to explore the possibility of a metabolic or mitochondrial disorder on top of her Aicardi diagnosis. I mentioned to the doctor that we've gone down this rabbit hole before and come up empty-handed. See previous blog post. So, we're in another waiting game as they review the testing that was done on Sadie a few months back.

Ultimately, Cleveland Clinic believes that they could remove part of her right hemisphere of her brain, the area with most malformation, and yield positive results. However, they want to explore the metabolic/mitochondrial stuff before proceeding. This means we have a little more time to make what will likely be the most important decision of our lives. Unfortunately, it also means that Sadie may need to go through another round of testing. In the meantime, we are becoming more and more impatient as we await doctors to review tests. Have I mentioned that patience is not a virtue I possess?

In the meantime, Sadie is rolling like crazy, and has even started to put some weight into her knees and get her bum up in the air...which is a precursor to crawling! These recent acheivements are likely due to her weekly therapy schedule, and some new therapy gear.

Every morning, Sadie "suits up" in her therapy gear - she wears a SPIO vest under her clothes. The SPIO vest is a compression garment that looks like a little scuba suit. The vest provides her with compression on her trunk so she can start learning to utilize her muscles to sit up on her own. She also wears fancy shorts called "hip helpers." The hip helpers look like biker shorts that are connected in the middle. They help kids with low muscle tone to help their hips develop properly. Finally, she just got AFOs (Ankle Foot Orthotics). They are leg braces that will help Sadie as she begins to bear weight on her feet. Sadie's are pink (of course.) She wears all of this therapy gear every day under her clothes. While it is a pain to put all of these pieces on each morning, we know that they will help Sadie as she grows and develops.

Sadie has also undergone quite a bit of testing this month. A few weeks ago, she had a Urodynamics Study. Her urologist ordered the study to investigate why she has had recurring UTIs (four this year!). We are still awaiting the results, but based on the lab techs comments, she does not reflux urine into her kidneys (this is a good thing), and she is emptying her bladder completely (also a good thing). However, she does tend to hold A LOT of urine. She was able to hold close to 6 ounces during the test.

Sadie also finally had her FEES study. We had to reschedule a few times while Sadie was in a rough patch with her seizures. Similar to a swallow study, the FEES study evaluates swallowing of food and liquid. Sadie performed remarkably well during the study. A small camera was inserted through her nose and down her throat, the camera then watches as she swallowed liquid and baby foods. Unfortunately, the FEES study found that she still aspirates thin liquids, but luckily, she is still able to handle her thickened formula and pureed foods quite well.

On a sad note, we learned this week that another Aicardi family lost their little angel at the age of 12. It always hits us hard to hear this. Additionally, an Aicardi family who we are close to are again in the PICU with their little one. Dad writes a lovely blog, which I have shared before. Sadie has coded once in her life - in February when we were in the trauma room of the ER - and I hope it never happens again. This father's recent post speaks of the crazy place in which we live where we hold our breath each time we step out of our child's hospital room.

We are again reminded to appreciate the little things in life - like Sadie's beautiful smile, the joy we get seeing her roll onto her tummy, and her feisty nature. It makes the waiting game with the doctors a little more bearable. And we are grateful for each day we have to share with her.
Posted by Cathy McCann at 11:19 AM