One Year Ago. Hindsight. 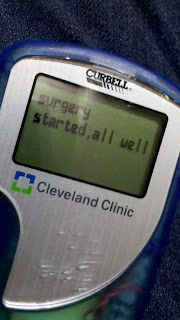 One year ago, we were preparing for what would be the biggest procedure of Sadie's life. On February 23rd, 2012, she had part of the right side of her brain removed. Similar to a hemispherectomy, the surgery removed her right frontal and parietal lobes of her brain. The hope was that by removing these areas of seizure focus, she would experience fewer seizures and have a better quality of life. The full surgery story can be found here.

It feels a little surreal to be approaching the one-year anniversary of her surgery. In some respects, it feels like it happened so long ago. It's been a rough year for Miss Sadie - a long recovery in Cleveland followed by two subsequent brain surgeries - a cyst fenestration in August to alleviate hydrocephalus, and a shunt placement in December when the hydrocephalus returned.

We knew going into the surgery last year that there could be a range of outcomes - anywhere from significant reduction in her seizures to no reduction. While we did see some initial reduction in the months following the surgery, the seizures seem to have found a new focus area on the other side of her brain.

Is this disheartening, yes. Does it make us question our decision? Of course. But we know that these are the unfortunate decisions that we as parents of a medically fragile child have to make in order to improve her quality of life. They are decisions that we wish we never had to make. We simply have to move forward and continue to do everything we can to make sure she has the best life possible.

On that note, a bit of good news is that her pee strike seems to be coming to an end - yay! After having to cath every four hours for a few weeks, she finally decided to start peeing again on her own. I was never so happy to see a wet diaper. Champagne was popped and celebration ensued. She is now peeing on her own about 90% of the time. There have been a few times every other day or so, when we have to go in to get the pee, but it seems that her bladder has regained it's function.

Ultimately, who knows why she started retaining her urine. Although the pee strike seemed to coincide with her treatment on the seizure medication, Banzel. While urinary retention is not a listed side-effect, Banzel proved to be an awful medicine for Sadie. It intensified her acid reflux - causing her to vomit a few times and actually seemed to make her seizures worse. Once we started weaning her off the medicine, she had fewer seizures. Case made that every girl with Aicardi Syndrome is so different, as Banzel has been a great medicine for many of Sadie's Aicardi sisters.

﻿ While the pee issues seem to be getting better, the constipation issues continue. We are following the treatment plan of Sadie's GI Motility Specialist who has ordered an anorecal manometry study. She will undergo this test next week to determine whether her muscles "down there" are operating properly to pass stool. Fun stuff.

Another bit of good news, is that Sadie completed her steroid treatment a few weeks ago - whew! We were hoping that getting her off steroids would help with her sleep issues. Unfortunately that does not seem to be the case. As a matter of fact, her sleep patterns have been getting progressively worse lately. She has been a bit hyperactive lately and is unable to nap during the day. At night, she is able to get to sleep, but staying asleep has been an issue. On a typical night, she is up between 3-6 times. The entire house is sleep-deprived.

﻿ We had been holding off on investigating the sleep issue in great depth, thinking that the sleep problems were related to her seizure activity - hoping that better seizure control would equal better sleep. After almost three years, and only a handful of nights where she's slept the entire night - we're ready to pursue an in-depth sleep analysis. More to come on that.

﻿﻿We have also scheduled an appointment to discuss a Vagal Nerve Stimulator (VNS) for Sadie. A VNS is like a pacemaker for the brain - helping keep the brain waves from getting too crazy. VNS has been a highly effective tool for girls with Aicardi Syndrome, and we can only hope that it is just as helpful for Sadie.

So, lots going on in Sadie-Land. She is back in the swing of things with all of her therapies. And overall is more alert and attentive - giving out lots of smiles, which makes this crazy journey a lot more enjoyable!