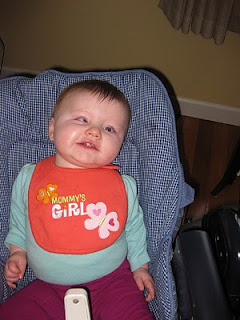 The past few weeks, Sadie has been quite verbal and is often taken to having long conversations in her crib in the middle of the night. She's not cranky or upset, she just wants to chat. She'll do this for hours on end, but simply prefers to do it between the hours of 12 and 4 am. We hope this bodes well for her future verbal ability.

She has also been quite active, and has gotten close to rolling over. She keeps herself entertained talking and moving, moving and talking for hours at night in her crib. Adin and I will alternate getting up to check on her. The conversation usually goes something like this.

Cathy: Honey, can you get up and check on her?
Adin: Arrgh...
Cathy: I think she just said "daddy." She obviously wants you.
Adin: Arrgh... (rolls onto his side and climbs out of bed)

Seeing as how she likes to communicate with us, we've started to teach her sign language. We're currently teaching her two signs - "milk" and "more." We've done better with the "milk" sign, and swear that she is trying to do it on her own!

She also does a funny thing when she's dosing. Her eyes are little slits and we ask her if she's "fake sleeping." She typically responds with a big smile although her eyes are still mostly closed.

Speaking of sleep, we broke down and tried the melatonin one night. She slept for a record four hours (four hours, people!). Unfortunately, the next day was a crazy high seizure day for her. Its hard to discern whether it was the melatonin or another factor. So for the time being, we're holding off on the melatonin until we're at a more stable place with her medications.

Speaking of medications, Sadie is still on her four seizure meds (Topomax, Vigabatrin, Clonazapam, and Dilantin). The latter two are the ones that seem to be showing some positive improvement. We're still weaning Topomax, albeit very slowly. Vigabatrin will be weaned next. It will likely take us until June or July to get her off both, as long as we see no adverse effects.

Speaking of adverse effects, we've heard from many people that seizure activity often spikes right before a child gets sick. We think that is what happened with Sadie earlier this week. We spoke with the on-call neurologist after she had a really rough night and morning - seizures happening every 5 minutes. The neuro advised us to give her Diastat (emergency medication). This is a huge thing for us, as it was the first time we've administered Diastat at home. It was a little nerve-wracking, but it stopped the seizures. She, of course, was way out of it for the rest of the day. Not suprising, as Diastat is a form of Valium.

Because Diastat can suppress breathing, we hooked her up to her new pulse oximeter to monitor her O2 level. Pre-diastat, her O2 was about 95%, post-diastat she hovered around 85%. I was again on the phone with doctors, and was trying to avoid the dreaded "take her to the ER" response. (Sidebar - love love love the folks in the ER at Children's, but we feel like the past few times we've been there, Sadie's been hit by a wrecking ball as they try to get her O2 levels back up.)

So, we took her to the pediatrician. Luckily by that point, her O2 had gone back up into the 90s....whew - crisis averted. In the meantime, our lovely home nurse (who sees Sadie once every two weeks) had an oxygen compressor and tanks delivered to our home. So - we've added to our beautiful collection of medical equipment. Lo and behold, two days later, Sadie comes down with a horrible cold. The seizure increase served as our warning sign.

We forge ahead as Sadie approaches her first birthday at the end of this month. So hard to believe that our little girl will be one soon. Even through all the hospital visits, doctor appointments, therapy sessions, etc., she has been our joy and the light of our lives.
Posted by Cathy McCann at 11:02 AM