The Wrong Side of the Crib. Team Sadie. 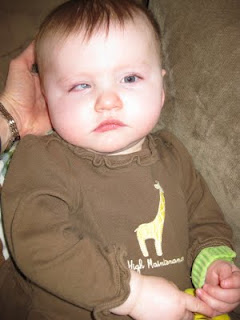 Since Sadie's been home from the hospital she's been a little crabby. Adin likes to say that she woke up "on the wrong side of the crib."

She is still attached to three cords - one for her oxygen, another in her nose (NG tube) for feeding, and a third attached to her foot (her pulse oximeter which monitors her O2 levels) Most likely, she is mad about all the darn cords attached to her. Although she may also be pi*&?ed that she can't wear her cute outfits. Her current attire is old sleepers with one foot cut off. You see, she currently can't wear clothes that go over her head due to her oxygen tube, and she needs one foot free for her O2 sensor. Thus, our one-footed sleeper invention. Adin says we should market it and make millions ;)

Our days have become exponentially busier as Sadie is always cycling between feeding time, oxygen monitoring, breathing treatments, and medication administration. Nursing was never a career I considered, and I'll admit, it's a little stressful. Good thing I love my patient. We are hopeful that we can wean her off of the oxygen soon, and the NG tube will go away once she shows no aspiration in her swallow study.

Our hospital experiences with various medical professionals have made us extremely grateful for the team we have in place to oversee Sadie's care.

Dr. Lori Walsh, Pediatrician - I knew Dr. Walsh was a keeper from the moment I met her in our prenatal visit. She was truly interested in Adin's PKU (Phenylketonuria). She even called at 8 pm one evening to discuss what she learned about the genetics of PKU. Dr. Walsh has been the key player in coordinating all of Sadie's care. She truly understands Sadie and her condition and has been the ultimate partner throughout Sadie's journey.

Dr. Srishti Nangia, Epileptologist (a long word for "seizure doctor") - Both times Sadie was inpatient at Children's Memorial, Dr. Nangia visited us every single day - including weekends. We've been on the roller coaster with Dr. Nangia since the very beginning. She helps us through ups and downs, listens carefully, and knows Sadie quite well. She is a wonderfully compassionate, thoughtful, and caring doctor.

Dr. Hawke Yoon, Opthomologist - We met Dr. Yoon when Sadie was just three weeks old. Our journey to her diagnosis started with Sadie's eye exam under anesthesia. He quickly won our hearts when we asked about the procedure. Not finding a piece of paper handy, he pulled out his pen and started drawing a diagram right there on the bedsheet. The first few months of Sadie's life, we saw Dr. Yoon almost weekly. And he just has a cool name.)

Dr. Tadanori Tomita, Neurosurgeon - Dr. Tomita monitors Sadie's choroid plexus papilloma. Sadie receives an MRI every few months to check the growth of the tumor. If it gets too large, it can cause a condition called hydrocephalus, which would require a shunt and brain surgery. We know that we are in good hands with Dr. Tomita.

Roland Scott, Ocularist - Roland Scott fabricates Sadie's eye prosthetic (conformer). He fits Sadie's eye very carefully, and given how sensitive her eye is, we see him quite frequently. She gets larger conformers every few months as she grows, and he is always very careful and patient as he molds and fits each of them. Ocularists are hard to find - there are only about six of them in the Chicago area. Roland is actually the second that we've seen as we weren't entirely happy with the first. We joke that his lab resembles Dr. Frankenstein's - pots boiling over, him in a white lab coat, but overall, we've been very happy with his work.

Robyn Blackford, Ketogenic Dietician - Robyn oversees Sadie's ketogenic diet. Even though she was booked with patients, she helped us get Sadie into the hospital to start the diet on an emergent basis when her seizures were almost non-stop. She is a wonderfully knowledgeable and kind individual.

Michelle Johnson, Home Nurse - It was Michelle who ordered Sadie emergency oxygen for us to have in the home. A week later, Sadie ended up needing that oxygen to get her through until the ambulance arrived. Had we not had the oxygen, Sadie would likely be in much worse condition. Michelle was introduced to us through a great organization called Hope's Friends.

Team Sadie will be growing this week, as she has appointments with a few new specialists - a pulminologist (a doctor specializing in respiratory issues), and a urologist. We hope the pulminologist will be able to offer some insight into why these darn respiratory viruses have hit Sadie so hard. And, although she is now pee-ing more frequently (pause for knocking on wood), we initially made the urologist appointment after she was holding her urine for up to 12 hours between diapers.

I'll brag about her therapists (who are also wonderful) in a later post. Although we would change it in a heartbeat, we are grateful that we have gotten to know such wonderful medical professionals and feel confident in their care for our darling daughter.
Posted by Cathy McCann at 3:36 PM